Research on Subsidies for Logging & Burning of Woody Biomass 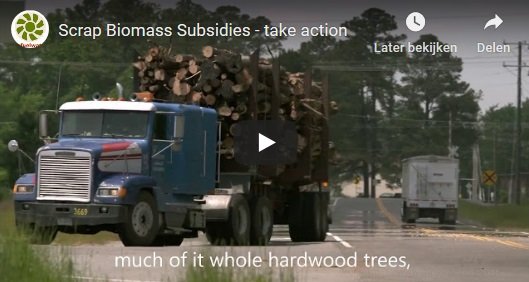 By including bioenergy in renewable energy targets, the EU is promoting direct and indirect subsidies for it, claiming that it is a sustainable alternative to fossil fuels.

Every year billions of euro's in renewable energy subsidies paid out of a surcharge on our electricity bills – went to power stations burning wood. This is money which should go to genuinely low-carbon renewables such as wind, wave and solar power. Altogether, far more wood is being burned for electricity than is produced annually in Europe.

Warning for quick fix that does not lead to the solution

This document written by Johan Vollenbroek from the Mobilisation for the Environment organisation warns against another quick fix and states biomass power plants should be shut down immediately.

"...Subsidies for biomass plants and wood-fired power plants must be ended immediately. As a result, profits disappear which puts a brake on unwanted expansions which saves a substantial amount of nitrogen emissions..."

This report commissioned by multiple organizations like TPFC, WWF, ARA and DenkHausBremen clearly states the reasons why burning woody biomass to mitigate climate change is a misguided strategy.

“…Wood contains less energy than coal, oil or gas. Thus, more of it has to be burned to produce the same amount of energy. According to calculations by the Intergovernmental Panel on Climate Change, heating with wood releases almost twice as much carbon dioxide (CO2 ) as using gas…”

“…The European Union has recently updated its Renewable Energy Directive (RED II). Among other things, it aims to increase the share of renewables to 32% by 2030. This is an ambitious target, as the current European average is only 17%. This will further increase wood consumption in the future. One reason is the EU’s decision to consider the burning of wood as climate neutral. This decision made it possible for the Member States to subsidise the use of woody biomass as a measure to mitigate climate change…”

“…countries like Denmark, Belgium or the Netherlands, the number of wood biomass power plants is on the rise. In the coming years, European demand for pellets alone will increase by a further six million tonnes. The European Union is one of the most important perpetrators of this misguided development, as it recognises wood burning for electricity production as a climate change mitigation measure. This has made Europe to the most important destination for the international pellet trade…”

This legal document contains the main arguments in the EU Biomass Legal Case where the applicants seek annulment of the inclusion of “forest biomass” – essentially
trees, including, stems, stumps, branches and bark – as a renewable fuel within the
Renewable Energy Directive (recast) 2018.

"...The use of forest bioenergy can also perpetuate harms to other systems. Co-firing biomass with coal allows coal plants to continue operating and even collecting renewable energy subsidies, perpetuating harms to human health and the climate from burning coal. The statement of Tony Lowes in support of this application describes co-firing biomass in peat-burning plants in Ireland, thereby perpetuating the destructive practice of stripping peat for fuel. The Directive does not recognize peat as biomass, but support for woody biomass co-fired with peat ensures the peat-burning plants continue to operate..."

This report was commissioned by the EPN as a wake-up call to those governments that are subsidising coal to biomass conversions; will persuade investors that financing biomass power is not sustainable; and will persuade energy analysts, retailers and consumers to distinguish forest biomass, as a high-carbon renewable energy technology, from lower-emitting technologies like wind and solar.

Sustainable Biomass for Production of Hydrogen

This report was commissioned by the Dutch Government and was intended for the green sector (forest, nature and urbangreen managers) and the policymakers as they need a scientific evidence- based underpinning of the use of biomass (branch and top timber) as a sustainable raw material for bio-energy production and discusses that investments made in the burning of biomass will delay the transformation of higher quality application solutions.

"...Bioenergy plays a role in the energy transition. Whether that is a temporary or a permanent role is difficult predictable, but the higher quality applications (as a green raw material) in other sectors, such as in chemistry, are slowly increasing. Long-term support measures for bioenergy such as subsidies can delay this transformation..."

“…Countries looking to meet their commitments under the Paris Climate Agreement and phase out coal must stop wasting scarce public resources subsidizing dirty and destructive biomass energy. Instead, policymakers in the United Kingdom, other European Union member states, and emerging markets for bioenergy around the world should redirect investments to genuinely zero-carbon energy sources like energy efficiency, solar and wind…”

This document contains the answers from the Dutch government concerning questions about the damage to the environment caused by burning wood.

"... PvdD party question for the Dutch government:
Do you share the view that it is no longer justified that the government subsidizes and promotes pellet stoves and biomass boilers as renewable energy sources?
If not, why not?..."

"...Dutch government answer:
As part of the ISDE evaluation, the government will critically examine the desirability of further stimulation of small-scale biomass combustion..."

This report commissioned by main parties like the Dutch State Forest Management and it's former Director, Professors at the University and others concerned with the massive amount of trees being logged for biomass production.

The Reputational & Financial Risks of Investing in Forest Biomass Energy

This briefing document, a collaborative effort by Environmental Paper Network, Biofuelwatch and Global Forest Coalition, sums up the reputational and financial risks involved with investing in forest biomass energy. “Reputational risks stem from the growing awareness and body of evidence showing that forest biomass is far from being a low carbon or even carbon neutral energy source. […] Reputational risks can translate into financial risks given the high level of dependence of this form of energy on public subsidies. Failure to fully disclose environmental, social and governance (ESG) risks in portfolios exposes financial institutions to regulatory risk.”

“Our organisations could find no evidence of any power station, combined heat and power plant or larger biomass heat plant in the world that is reliant on forest biomass and operates without subsidies (including direct subsidies, indirect subsidies paid via electricity bills, and preferential loans from publicly funded or owned bodies).“

This Vox-article discusses how it came to be that Europe’s banking on biomass to meet their obligations under the Paris agreement is causing forests to be felled in the US (and elsewhere) and how large scale deployment of biomass for energy is in fact failing to meet any carbon reduction targets at all.

“Several countries, like the United Kingdom, subsidized the biomass industry, creating a sudden market for wood not good enough for the timber industry. By 2014, biomass accounted for 40 percent of the EU’s renewable energy, by far the largest source. By 2020, it’s projected to make up 60 percent, and the US plans to follow suit.”

“Drax powers 10 percent of the British electric grid, in large part thanks to massive government subsidies: about $1.2 billion a year.”

This report is commissioned by the European Environment Agency and states the result of subsidies being diverted from real sustainable solutions like wind and solar to the burning of biomass.

"...the annual pace of growth in the EU has stagnated or decreased for most renewable electricity (RES-E) technologies and for renewable heating (RES-H) from solar thermal and heat pumps. It has continued to increase for only a few other renewable energy technologies (i.e. geothermal and solid biomass-based technologies)..."

"...the current average pace of renewable energy deployment across Europe would not enable the EU to achieve the new RES target, of 32 % by 2030. Meeting the more ambitious EU-level RES (and climate mitigation targets) for 2030 and 2050 calls for steeper deployment rates of RES across all sectors and especially in heating and cooling, and in transport (EEA, 2018b)..."

We are analyzing reports and creating & posting new summaries every day. This is time consuming work but we will try to deliver multiple summaries per day. We are currently processing reports from 2019 and will work our way back into the hundreds of official research reports commissioned the last decade.